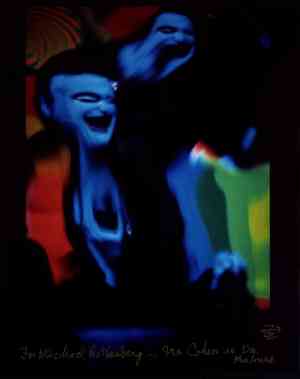 He uses phrases like: "Electronic/Multimedia/Shamanism" and Akashic Record and they are cool names if you know what they mean or can get past them. He is not a "Beat" and resents association with the Beats though he has been called "post-beat" which is important for our knowledge. But I see him as being in the heart and belly of the 60's doing the real work--camera, pen, dope, exploration of mysticism, a multi-faceted phenomenological mystic with real visionary powers. And I want to open people up to him. Bring them through a friendly door and then let them descend into Ira's world without knowing it is happening, and then finally find themselves in this mystic paradise of life and death, his "revolving door". And then ask themselves "how in the world could I have not known Ira Cohen?" Or have not known how key he is and was to the understanding of the old and the new, the hallucinatory mind-expanding layers of reality that frighten and amuse us, the panorama of the traveling circus of all physical and non-physical things. Cohen is a true and unquestionable original innovator, friend of Gysin, Burroughs, Bowles, and Charles Henri Ford, the absolute geniuses of transformation, transmigration, and the cosmic joke. And then when the audience walks away they will say, where is that monument to Ira Cohen, the one we built for Rimbaud and Baudelaire, for Burroughs and Valery, for Genet and Gertrude Stein. Ira Cohen must be made accessible! But he has made it absolutely impossible to penetrate the organic construct of his spirit, without running the risk that you will sell him out in the process--or maybe not. Maybe something gentle to begin with, a pale lavender, a dash of blue and fluff of white, then the slow spinning of Gods and Gurus and Shamans and Mythologies, the painted faces, deformed limbs, the broken erections, the flaming corpse of his dearest friend Angus MacLise and then settling everyone down to say: Hey, it's alright. There is life, laughter, love and humanity in these strange visions, no need to come down from your trip, be cool with it, it is the inside of a beetle's shell, life in a termite nest, air rushing through the lungs and jaws of a lion, a hoot! 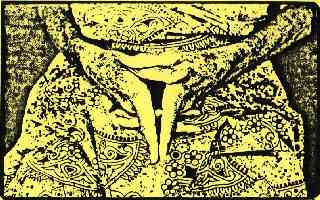 Akashic from the Sanskrit AKASH: Towards the shining (manifestation), etheric, sky speech, the hidden meaning of the hidden meaning, the Psychic Keep, the unwritten history of humankind--past, present & future, God's Book of Remembrance, the Universal Radio, the Subliminal Cassette, the Cloud Doctrine, Diaries of the radar etc.

The Akashic Records are nothing less than human thought preserved as are radio waves in ether. An Adept or receiver sufficiently tuned to these vibrations would then theoretically be able to read these records, even listening in to past or future thoughts or conversations. From Poetry to Prophecy. From light -- Clairvoyance!"
- Ira Cohen

[Ira table of contents]
[back to Big Bridge home]