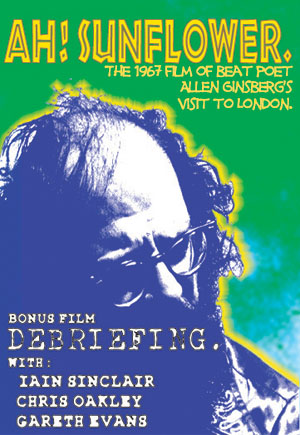 Forty years ago, two youthful film-makers, Iain Sinclair and Robert Klinkert, were lucky enough to be in the right place at the right time. London. 1967. They were commissioned by WDR (Cologne) to make a 16mm colour-film documentary about Beat poet Allen Ginsberg. Now re-released on DVD with contextualising film Debriefing. (info@thepicturepress.co.uk)

The story of this adventure - madcap drives, political arguments, technical disasters, human comedy - was told in a long thin book, The Kodak Mantra Diaries, published by Sinclair's own Albion Village Press in 1971. It was Sinclair's first prose work and the beginning of an epic London project. The film itself, Ah! Sunflower, led a fugitive existence. It was glimpsed, occasionally, at European film festivals and then it vanished into the limbo of the reforgotten.

New technologies, new energies, a new millennium. Film and book have been dusted down, given a lick of paint and released once more into the market place. The book - which includes lengthy interviews with Ginsberg, RD Laing, Paul Goodman, Barry Miles - has been reissued by Kevin Ring's Beat Scene (kev@beatscene.freeserve.co.uk).

Ah! Sunflower, the film plus new interviews with Sinclair, Chris Oakley (psychiatrist and Laing associate) and writer Gareth Evans, has been revamped into an attractively packaged DVD by The Picture Press (info@thepicturepress.co.uk).

There will be a screening of Ah! Sunflower, along with other short films in a 'Beat London Recovered' programme at the Renoir, Bloomsbury, on 28 January at 12 noon.

Ah! Sunflower is a colour record of Allen Ginsberg's 1967 visit to London. Ginsberg was then at the height of his fame as a roving ambassador for the counter-culture. He had been elected King of the May in Prague and then expelled. He had been welcomed to Cuba - then invited to leave, when his sexual preferences caused outrage. Trips to Paris, Tangier (with William Burroughs and Jack Kerouac), India with Peter Orlovsky and Japan with Gary Snyder, seemed to culminate in this return to London, the scene of the famous 1965 poetry readings at the Albert Hall, captured by Peter Whitehead in Wholly Communion.

The Congress of the Dialectics of Liberation, held at the Roundhouse in Camden Town, was a very different affair. The black activist Stokely Carmichael launched a scathing attack on the hippies and the posturing of comfortable, white drop-outs. And the white drop-outs loved it. Anti-psychiatrists RD Laing and David Copper proselytized the voyage into madness. Gregory Bateson issued apocalyptic warnings about coming eco disaster, the melting of the polar ice caps.

The Klinkert/Sinclair film, with its youthful enthusiasm and naivety, is a significant, present-tense documentation of now historic events: arguments that undermine marketable notions of peace, love, beads and flowers. Cultural fault lines are already visible. Many of the major participants - Ginsberg, Burroughs, Laing, Cooper, Goodman, Stokely Carmichael, Emmet Grogan - are dead. By accident, through the warp of time, such films become part of the record, the hard evidence of a city at a particular period. But, beyond everything else, this is a fractured portrait of a charismatic poet at a time when poetry mattered.

Iain Sinclair, Gareth Evans and The Picture Press film-makers are available for interview. Or further events.