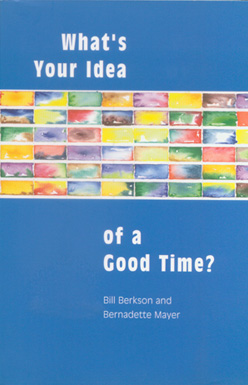 What's Your Idea of a Good Time, a book-length collection of letters between Bill Berkson and Bernadette Mayer is prefaced only by [In or around 1977, Bernadette Mayer and Bill Berkson initiated a correspondence that eventually centered on question-and-answer exchanges usually folded inside accompanying cover letters. The candor and intensity of these epistolary interviews was sustained well into the mid-1980s. Included are intimate musings on everyday life, childhood, marriage, sex, poetry and other arts, cooking, weather, house-and-garden details, fashion, politics, philosophy, time, identity, morality, and much else besides. Although the exchanges have continued intermittently to this day, it is the bulk of that early, high-intensity phase that the present volume represents. In that respect, this edition is complete, but for some lacunae that have proved unfillable: mice ate two or three of Bill's letters kept among Bernadette's files. The title What's Your Idea of a Good Time? was the question that sparked the original project.]

I've asked questions of myself as a response to this.

Is this the best book you've ever read?

Yes and no. It's the best book I've read recently! What a downpour of moments! Getting caught in this epistolary friendship between these two minds pays off in many respects. Bernadette Mayer writes to Bill Berkson "had great pleasure today reading your answers—why is it that there's nothing that engrosses me more than getting and reading your answers over these months. I must admit I prefer them to my own poetry, the books I'm reading, the newspapers, not to speak of magazines I receive in the mail." What's Your Idea of a Good Time is literary history, gossip, sociology, politics, well here's an example. It's also confession, here's Mayer

God the Life of the Poet sounds awful, we know it is awesome. I'll tell you my thought about writing or not writing, I want at my age to be involved in the politics of my time, I'm sick of all this alienation bullshit & I'm sick of being short-circuited as all, I'm supposed to be unconnected to everything. They're making recluses out of all of us—on purpose!"]

What makes this book so memorable and unique?

What's Your Idea of a Good Time provides an interesting slice of mind from two poets riffing on what made the poetry world tick in the late 70s and early 80s. From a brief history of behind-the-scenes goings-on at the Poetry Project in New York (Mayer was one of the directors there at that time) to what it was like for Berkson to live in Bolinas and all points inbetween, the book provides great context  What follows is Mayer answering one of Berkson's questions.

[How did you become a poet?

Maybe it was because of the examples of Catullus & Sappho. I always wrote—first stories, a diary & serious joking & journalism. Maybe it was because of my mother's diary in a stenography so invented or esoteric I could never get anybody to translate it. As for school, translating Latin & Greek was more like poetic thought than reading English literature. On quitting school (but before you and I met in your class), I painted for a while but not to the world's avail and with little devotion to the study of it. I somehow thought, having looked at paintings that if you could paint you would know it from your first attempts. I still sort of hope that I can paint & try it out sometimes, assuming I might become magically adept. To write poetry though my instinct was to study, experiment and fail which I did rather systematically and haphazardly for a year exactly previous to my attending your New School Class. I did little else for that time but go to John Cage concerts and read. It was somewhat like an endless large-scale Scrabble game]

Reading this book is a bit like watching reality television, you can't turn away from the dramatic element of it. It's a no-holds-barred soulswap between two talented poets.

Is this series of interviews similar to watching the World Series?

Absotively. Although the responses in the book seem lopsided in Mayer's favor (she gets the most coverage in the book), what makes What's Your Idea of a Good Time interesting is the magnificent sense of respect between these writers and the genuine candor with which they respond. Berkson responding to one of Mayer's for example:

Well, you gotta read da lingo ta study da stuff, wrong? The answer to your question is Yes, Why Not, Of course, What do You take Me for, & Actually the reason you sometimes catch me poo-pooing psychology is our perfectly fictive Narcissism: I can't help thinking of myself when I read those texts, and so after a while, after they've made me feel hopeful for a very little while, I feel worn down by them.]

Will this book ensure world peace?

Yes, it will. One of the more interesting themes in this series of interviews is the idea that a secret inner life exists. I believe the masses have much to gain from an appreciation of art and that the art experience leads to a fuller sense of existence. If that doesn't sound grandiose I don't know what does. To whit Berkson answers

[What is your secret inner life?

Oh, deep trouble this one. (These questions are making me feel drunk. Were you perhaps drunk when you wrote them?) My secret life is probably laid bare in poems without my noticing it. I can believe that because I've noticed it after reading again & again. A lot of my life because of well-known difficulties of self-knowing itself is secret from me. If I could tell you I would let you know! Much of the time I am secretly counting via songs in my head. Part of my secret life is forgetting how hidden I am to others who don't recognize the surface of my self as I do. Very puzzling.]


Read an excerpt from What's Your Idea of a Good Time?