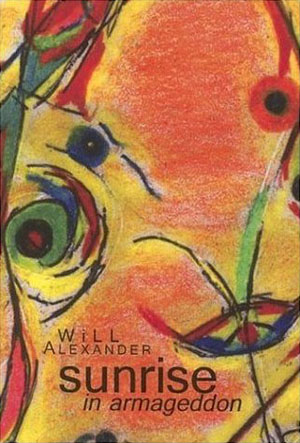 Will Alexander is a poet of distinction. His several books, both poems and essays, his command of a language as metaphorically rich as any I have encountered in English, reveal a man, now at middle age, for whom the powers of writing retain an oracular cast. Indeed, much of Alexander's work informs a sense that essential issues are at stake if only by way of the passion he brings to their evocation. That Alexander is a poet of precise meaning with a grasp of several vocabularies — from myth and alchemy to biology and astrophysics — has also gained him the respect of readers. When he invokes a relationship between the cellular structures of the body and the physics of stellar nova, for example, I, for one, accept it as a trope of the text being born and a nexus for further study. True philosophical poetry requires this kind of attentiveness, just as true philosophy does. Similarly, Alexander understands that thought, and more pertinent for us here, presence, resides in its expression; an immanence revealed.

Now Alexander has offered us his first anti-novel. Sunrise in Armageddon, over 382 pages, charts the internal strife and divinatory prowess of one Pandora, an African-American woman who escapes an abusive husband to reveal, at great cost, her re-creation as a writer. In doing so, she abandons her two daughters, her family, and every value of social identity she can. She transgresses the norms that frame our world, and the murderous horizons that history has poisoned her with: war, terrorism, political and religious tyranny, commodity worship, and the technocratic struggle to rule the planet.

Pandora slips between the cracks. She lives in the shadows, on the streets, in hovels writing not so much to resolve the conflicts that possess and dispossess her as to ignite in each a visionary sorcery of metaphor and critique. She opens herself to the voices within her, and as they rise from her guilt, her divisiveness and her fear, she suffers her losses and celebrates her anguish. So thoroughly does she mask the world, and so clearly does she evade the hubris of that masking (even as a crucial self-reflection) that she triumphs in duplicities charged with prescience -- duplicities that subvert in her what she notes in us: the subtle, insidious prevarications that gradually tie us to the quotidian.

Pandora is in flight: from herself as she was to herself as she is; from her children to their incubus refraction; from her failed marriage to her delirious, if solitary, freedom; from her family, and attachments, to an ascesis that ripens the life she seeks: precarious, effulgent, momentous; the life of a writer inspired by marvels that rise above the devastated landscapes we accept, all too much and too knowingly, as inevitable.

Have we met Pandora? In part, yes; we know something of this woman whose fugitive acrimony brings down upon her the Eryines of judgment, and because of which she incites a confession that exhausts the book. Do we wish to know more of her? That is a question I cannot answer. For Pandora, with all her poetic thaumaturgy, cannot release herself from the dangers she faces as a woman; a woman half real, half imagined. Curiously, she has little means of transforming her anguish beyond the metaphoric labyrinths she fires, save in the levitations of exhaustion. And her abyssal conjurations, where love, it seems, rarely enters, refer us to those who precede her: the Sumerian goddess Ereshkigal, the Oracle of Dodona, a Gnostic priestess of the elite Pneumatikos, a Stryga who drifts through time and place.

By focusing the work exclusively on Pandora, Alexander forecloses on more expansive interactions that would depict her from other eyes — and for whose loss he substitutes a near incantatory repetition of allusions and spells that mutes the more it is used. At the same time, Alexander provides little arc to the drama that enthralls Pandora, and what may come of it. Which leaves this reader with a question that Alexander raises, if implicitly, then takes leave of: To what end the difference between a fictive chronology of an event (our customary novel) and a poetic eruption framed as a novel that eschews externality? This is not a question of stylistic or structural stratagems; it concerns the evolution of the emotional conflicts at stake -- however portrayed -- and what allows the reader to enter them, even to adopt them as his own, in whole or in part, toward their final form. And it revolves around poignancy: of how to reveal it for those willing to meet you where, and when, you wish them to.

This question also highlights a weakness in Alexander's book in regard to reciprocity; the kind of reciprocity between author and reader that raises the stakes, and makes of the reading an encounter that clarifies and deepens.

That this book is a summation of sorts of Alexander's interests, that it revives a sense that our epoch now blindly, now clearly, approaches a verge sans retreat, is clear. That the leap implied entails species transformation for Alexander, with prophecy its lifeblood, returns me to the character of the writing, to Pandora, and the lens that mutates within her. Is she here or there, now or then, partly temporal, spatial, sexual, intellectual, mythic, eschatological — this woman in becoming inspired by absolute divergence? Even so, I hesitate to use the term absolute for fear of already having lost Pandora within it. Human frailty is not a shadow game played out against absolutes save as an intimate drama to secure some living space. All the rest is history and theory. I would like to believe that Alexander agrees with me here.

Sunrise in Armageddon offers an infusion of risk and vibrato; its light pregnant, its heat real. Nor does it fade quickly but smolders into dusk: blood red, green blue. Despite its faults, and with all its variable densities by turns transparent and opaque, it is a book that will draw readers for whom an oracular birthing strikes home.