I first read Ed Dorn through a friendship with Dale Smith.

While working in a small dot-com in Austin Texas I began an enduring friendship with Dale Smith in the fall of 2000. Just before 9/11 we were overpaid, under worked and jointly running the office. Between delegating translation jobs to a motley cru of cyber-zombies (some harmless but most infected with malignant consumer virusess), we passed the time in conversation about Ezra Pound, Stan Brakhage and the latest rants of local conspiracy radio jockey Alex Jones. We learned to juggle. Dale would rant about the mix-up in Martian poem telepathy and its sketchy transmission through L=A=N=G=U=A=G=E interferences in outer (or is it inner?) space. He would also stress the importance of that hermetic transmission from the cosmos.

I would ask advice on how to rid my house of the ghost who disturbed my sleep nightly (I have since been rid of that problem), read American Rambler and lamented that I had ever seen Saló. In regards to Saló, Dale immediately prescribed The Gospel According to St. Matthew but I think knowing the same person made those movies fucked my world even more. I eventually asked Dale for a bibliography of books to read. He directed me to Charles Olson's A Bibliography on America for Ed Dorn. Who the hell was Ed Dorn?

By May 2001 Dale and I were the only two people left in the office but we had a proof reader and a receptionist temp at our disposal. Dale wrote (Ed Dorn Out: Forms of Dispossession, Coo-Coo Fourth of July and notes that later became The Flood and the Garden among other things) and I continued to read. Under the haunting gaze of Ed Dorn's aviators, I not only dug into Pound, Lawrence, Williams, DeVoto, Jung, Sauer and even Things Maps don't Tell, but I also read Dorn himself extensively and intensively. I read whatever interview I could find. I photocopied Dale's entire copy of Edward Dorn VIEWS on the company dime. I ordered 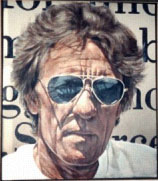 The Shoshoneans: The People of the Basin-Plateau, Recollections of Gran Apachería, and Gunslinger. I remember being taken by Dorn's use of a strange ligature (over "st" and "ct") in the text of Gunslinger. They were simple and inconspicuous but the ligature's great beauty called to me. Although I had never consciously seen them before I felt a great longing for the forgotten sensibility they represented. I asked Dale about the ligature's and he invited me to email Tom and Angelica Clark about their meaning. I still have the email from Angelica which talks about Ed's "Elizabethan ear" and his "love of typography" in my copy of 'Slinger.

Like a modern day Cabeza de Vaca, I saw Dorn as part shaman part sympathetic conquistador and part Benedictine Illuminator from the 13th century. I marveled at the magic of Dorn's occult sensitivity to both the physical and imaginative landscape. Dorn was a poet not only of craft but of being.

Well, I think one of the great functions of
that essay, its "projection," is the fact that it
opened out the field of the business of the
poem into literally every corner of life that
exists and there is nothing, there is no form
that the poem cannot now be able to bear.2

This was the kind of poet Plato wanted expelled from his Republic. I wondered what kind of person could look out beyond Devil's Tower and exhume the palimpsest story of the land, it's plants, animals and people not for sake of fact or categories but to make sense of who we are today. (Words like cathedral, much less stump do not describe this singularity.)3 I wanted nothing more than to see the world the way Ed Dorn did.

Sometime in September 2001, just after the Monarch Butterflies began the final leg of their journey into Mexico, our dot-com bubble burst. Dale was making some edits on one of his projects and I had my feet up reading (DeVoto?) when two suits came into the room. Just like that the gig was up. It was Ed Dorn who inspired me to pursue my musings in divinity, philosophy and cinema. I realized one didn't have to be a Poet to practice poetics; the poetic is not only measured by the verbum but by the logos.

There is a tendency for people to say "poem", and think a certain way. I've noticed this over the years, partly with students, but with mature poets also, any kind of poet, actually, The idea is that somehow there's a certain kind of restriction imposed on something by being a poem I feel that that's not true, that's not true in any sense. And in fact it's completely counter productive and unreal to think of the poem that way . . . 4

Poetic recovery and protest isn't a craft whose aim is to end up on the shelves of Borders next to Jimmy Stewart but to bear light upon, and disclose the depths of, our immediate landscape. Going back to Plato, this is an act when pursued according to the force of the actual that will surely get one kicked out of any Republic. While I regularly experiment with the poem I couldn't tell you what line a poem "pivots" on. And seven years after first hearing about Ed Dorn and the Black Mountain School I still can't make heads or tails of Gunslinger but Goddamn I know what it means.

For my teachers: Ed Dorn and Dale Smith